Meeting the Governor of Saipan! 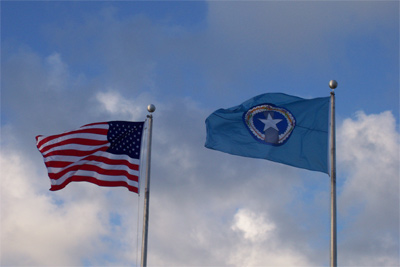 Just had a meeting with Governor Benigno and his entire cabinet! (In terms of political power, the governor is the top position on the island; right above him is George Bush). The week prior, I was told I would get to sit in on a cabinet meeting sometime during the day the coming Monday. But it seems there might have been a bit of a miscommunication, because when I called my contact person in the cabinet, John Joyner (Director of Coastal Resource Management) at 8:30am, I was told the meeting was about to start and that I needed to be there right away!
So here I was dressed in shorts, an unpressed shirt, sandals and a bad haircut due to meet with everyone of political significance on the island of Saipan. So I headed home, switched into more appropriate clothes, then headed back out (luckily I had rented a car the day before). When I got to the Governor' offices on Capitol Hill, John then told me that I wasn'tjust going to sit in, but that since what I came to the island to offer could benefit the most pressing concern of the administration at the moment (the forced reduction of work hours for several thousand Govt workers) that I was going to kick off the meeting, and that they (that would be the entire Cabinet) were waiting for me.
So with about 20 seconds to prepare (my network marketing training came in handy here!) I soon found myself doing my introduction, relating and telling my story, then tying it in to how we could interpret and suggest to the those affected by the loss of 8 hours per work period as a "golden opportunity" to focus on turning one's passion into profit.
I tell you I was in the zone, man!! It was in my estimation one of the better 4 minute impromptu speeches I've given! They loved it, I got cool feedback from the acting Minister of Finance who joked that he wanted to send me a list tonight of all the people who would be affected as well as the retirees so I could help them out! Don't have any pictures of that one folks! It all happened so fast!