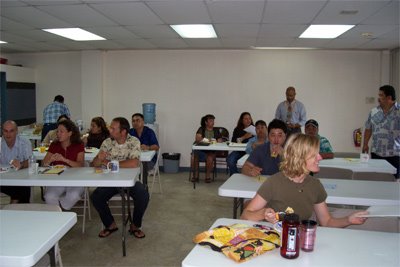 The CRM staff. Somewhere in this picture is perhaps the only other vegan on the island!
Today I conducted a special workshop for the staff of the Department of Coastal Resources Management here on Saipan. John Joyner, who attended the March 11 workshop, and orchestrated my talk with the Cabinet, saw a golden opportunity to share the Passion Profit philosophy and formula with his staff, and so organized a workshop in a meeting room at his department' offices on Beach Road. It was so great that it inspired a Life Rhyme included in today' edition of my weekly Walt' Friday Inspiration. (To see the archives of all 447 Life Rhymes, visit www.liferhymes.com)

Wouldn't it Be Nice?


Wouldn't it be nice, she said, to get my act in gear
I want to be a singer but the crowd's my biggest fear

I placed the mike before her and then gave her time to grow
what thoughts and fears did war within, perhaps we'll never know


And so it was by workshop's end with just a little coax
she graced us with her dulcet tones...in front of all those folks!

Perhaps the gift she gave and got today will now suffice
to help her live her dream out loud...yes, wouldn't that be nice?

COMMENTARY:
Today I conducted a special workshop for the staff of the Department of Coastal Resources Management here on Saipan. It was a great experience with a few magic moments. Among the insights and milestones achieved, we were able to get a chef-in-waiting to accept her first paid gig from the very department she works for. We got a night spear fishing expert his first $20 in cash from a willing client who paid him right there and then and set up their first teaching appointment for this coming Monday. And we coaxed a stage-shy singer to actually sing a song in front of the group---facing her biggest fear.

I've recently been reading success Ask And It Is Given by Jerry and Esther Hicks and decided on the spur of the moment to use one of the exercises in their book, (one I've been using successfully in my own life) to invoke the attractive power of the universe. The "Wouldn't It Be Nice" exercises is one step beyond visualization and just short of affirmation which causes you to resonate at the frequency, Unlike an affirmation, which encourages one to speak as if the dream is already real, "Wouldn't it be nice" allows you to dream of pleasant possibilities without the mental resistance one often encounters with affirming something that isn't yet real. Once spoken, your "Wouldn't it be nice" vibration attracts the people, circumstances, and in this case the very courage needed to bring the dream to life. I prompted her to complete the following: "Wouldn't it be nice if____________" to which she added..."if I could sing in front of this group."

Once spoken, I moved on to other participants and did nothing more than place a microphone in front of her on the desk and allow her dream to manifest in a room of possibilities. Sure enough, about 2 hours later, with just a little prompting, she sang a few bars from Jessica Simpson song to amazement and thunderous applause of all gathered!