Ok. Once and for all I had to break the spell of delay and the thrill of adventure that has kept me from making a timely post on the Escape from America website... So here it is, FINALLY! It's now Sunday, August 20, 2006, and I'm actually still in New York City. A lot has happened since my last post, so I'll offer a brief synopsis of some of the highlights

First of all, I left Saipan on June 23rd for New York in order to get to Canada for my Aunt's 80th birthday celebration/family reunion. Throughout the day (Canada Day, incidentally), family and friends from all over Canada and the states stopped by her farm in Ottawa to wish her well and share in the festivities! 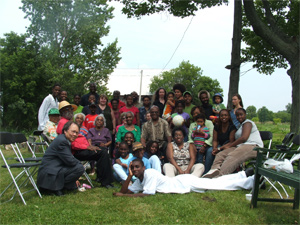 The former Mayor presented her with a plaque in gratitude for her community contributions. 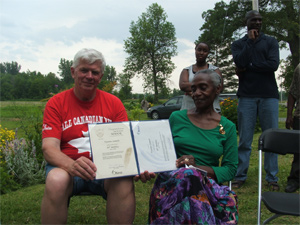 In addition to connecting to a side of my family with whom I've had limited contact, I got a little present as well!
All my life I had believed that this 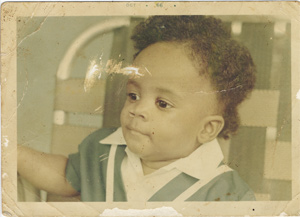 was the only baby picture of me that existed. As you can see, it's shown the years of wear from traveling around the world.
But, while at my aunt's, she asked if I wanted to see some pictures. So, while flipping through a bevy of images of days gone by, I was greeted by an image I had never seen before: another shot of me from that same session! 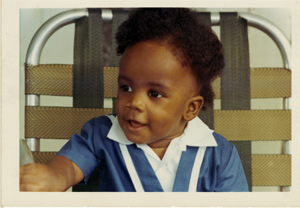 So, now, many years into this life I have an unblemished, color-correct image of myself from a new angle! Adds another dimension to this life of mine, and one that I'm thankful to Aunt Nye for preserving and now sharing with me!

A recent two-part article I wrote for the Saipan Tribune garnered some quite positive response. You can check out The 10 Commandments of Paradise at 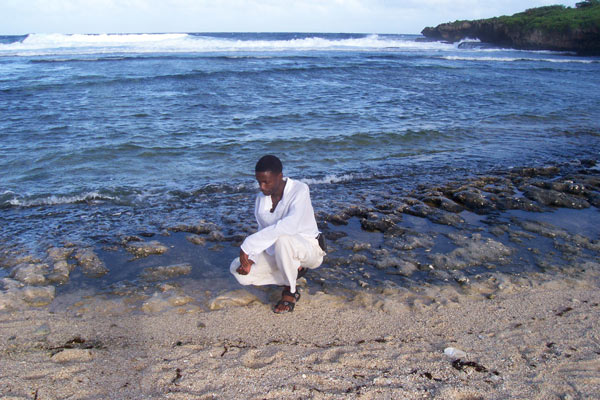 As of August 18, I officially ended my 9 year run doing the Walt's Friday Inspiration email! Received a lot of emails of congratulations and also inquiries into what's next.
Here is the email I sent out on Friday:

Last week's 468th weekly Friday Inspiration life rhyme marked exactly 9 years of consecutive intentional communication with you my readers. As nine is a number of completion, and since 468 straight weeks, while just a blip on the radar screen of eternity, is a good chunk of time on this earth plane, I've decided to bring to a close this chapter of my journey. Therefore, last week's edition was the final in the Walt's Friday Inspiration emails. (Sorry for the short notice!)
Yes, it was on August 29th 1997 that I sent the first Friday Inspiration email to a small group of friends and business partners. It featured a simple quote I had written years earlier for my college yearbook:
"The road to the top is for those who gamble with life's uncertainties, and who view setbacks as opportunities to excel!"
--Walt Goodridge, (College Yearbook)
President, a company called W & Niche Market Exclusives
Ending this nine-year run, this weekly tradition, this line of communication with you is a bit scary. It's been part of a formula I've used to create the freedom and impact I now experience. It's been a constant for myself and my readers that we all have looked forward to. I've enjoyed the tremendous feedback over the years and of learning how the life rhymes have impacted so many lives. Yes, ending them opens things up to a degree of uncertainty. But it's an uncertainty I'm eager to gamble with.
I've been greatly inspired these past few days by two books entitled Bringers of the Dawn & Earth: Pleiadian Keys to the Living Library, both by Barbara Marciniak. Within the pages of those books, I've found an echoing of who I am and much of what I've endeavored to accomplish throughout my life. This quote in particular resonated with me:
"It is time for you to make a commmitment to create joy, creativity and love for yourself. Only then will you benefit others, for if you do not evolve yourself, you do not serve others. By becoming a living example, by following what is in your heart, you show the way for others to follow with courage what is in their hearts."
It's another way of expressing what has always been my mantra and mission from day one:
"I share what I know,
so that others may grow"
I've come to realize beyond doubt that my life is a story to be told; that part of why I am here is to be that living example. So, even this act of embracing change and uncertainty is just another chapter in an ongoing story.
For those of you who have followed the story for these many years, I sincerely thank you for joining me on this journey. But, don't worry, I'm still here. The journey does not yet end. It merely shifts gears, turns corners, takes detours and evolves.
I'm excited by this change, even though I have no full or concrete idea of what I shall choose to become next. What I do know is that I intend to continue to be part of the revolution of thought and evolution of practice that will inspire, ignite and issue change among those of us who are here.
For those of you who have followed along for these many years, I sincerely thank you for joining me on this journey. I hope you'll join me for Chapter Next.
Walt F.J. Goodridge
The Passion Prophet
www.passionprofit.com
You can catch all the prior episodes by visiting www.liferhymes.com,
You can check out the final email, which includes a FINAL life rhyme entitled "99 Pennies" at www.waltgoodridge.com/insphtml/469final.html

So, I'm still here in the big apple tying up some loose ends in anticipation of my return to Saipan! Stay tuned! 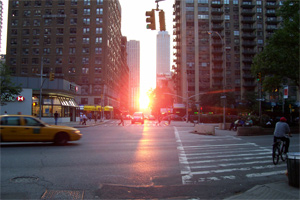